The three times weekly nonstop service between Los Angeles (LAX) and Shenzhen (SZX) will be operated by the airline’s newest Dreamliner, the Boeing 787-9. It will be the first direct service from Los Angeles to China’s City of the Future. 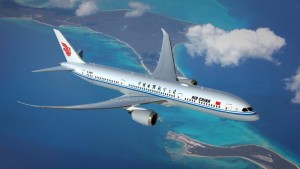 “With China as Los Angeles’ top trading partner, we are committed to growing and strengthening the economic and cultural ties between the two. The new nonstop Los Angeles–Shenzhen service brings together two of the world’s leading technology and innovation hubs,” Dr. Zhihang Chi, Air China’s Vice President and General Manager stated.

According to the Los Angeles County Economic Development Corporation (LAEDC), majority of Chinese investment into the United States originates from Guangdong Province which covers Shenzhen and Guangzhou.

Dr. Chi added, “At no time is the connectivity between these two cities more needed than it is now when China’shomegrown tech companies with headquarters in Shenzhen are expanding their presence and direct investments in the United States. This new service offers more options for business and leisure travelers to Shenzhen and Hong Kongwhich is only 19 miles away.

“As this will be operated with our newest Dreamliner which includes a premium economy class cabin, we are confident our competitive fares and affordable, easy upgrade programs will be very attractive for travelers to Shenzhen, Hong Kong and beyond. In addition to extra legroom, our premium economy passengers also enjoy priority boarding and more Phoenix miles, among other amenities.”

This announcement, Air China’s latest in a series of unprecedented expansions in North America, brings the average of its seasonally adjusted flights to 150 per week between cities throughout the region and China. Since 2013, China’snational carrier has been launching a new route every year.

A Star Alliance member and China’s exclusive national carrier, Air China is the only airline granted the privilege of having the flag of China painted on the fuselage of its fleet. In addition to its commercial operations, it also provides exclusive special flight services for China’s senior government officials on state visits to other countries. It is the top Asian airline in brand value, according to Brand Finance 2016. As well, it is the only airline in the top 20 of Millward Brown’s Most Valuable Chinese Brands 2016.

With a fleet of 590 passenger aircraft and freighters, Air China serves 174 cities in 40 countries and regions. It offers access to 1330 destinations in 193 countries through its Star Alliance affiliation. It holds the controlling shares in Air Macau, Shenzhen Airlines, Shandong Airlines, Dalian Airlines, Tibet Airlines, Beijing Airlines and Air China Inner Mongolia Limited.  Next to the Swire Group, Air China is the second largest stakeholder of Cathay Pacific Airways.