Which are the 20 best airlines in the world?

The Skytrax rankings are based on the impressions of 20.36 million travelers from more than 100 different countries. The survey, which covered more than 335 airlines, measured 49 parameters ranging from boarding procedures to seat comfort to the quality of service.

Singapore Airlines has been named the best airline in the world for 2018. The airline is one of the world’s premier travel brands, revered and respected for its impeccable customer service, range of cabin products, and an inflight entertainment system that caters to everyone. SIA flies 1.6 million travelers every single month, via 3,400 flights, and its expansive network includes 370 destinations in 86 countries. The airline was also victorious in 2004, 2007, and 2008. 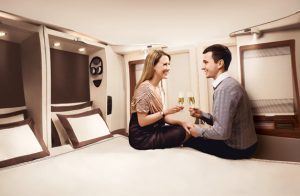 Qatar Airways takes the second place. The airline is certified with the 5-Star Airline Rating for the quality of its Onboard product and staff service and the Qatar Airways home base Airport service. Qatar has also been named “Best Airline in the Middle East”, “World’s Best Business Class” and “Best First Class Airline Lounge”.

Overall, airlines from Asia dominate the ranking by taking nine of the top 10 spots. Indeed, IMM International represents the media of more than 45 asian airlines. However, no US airline cracked the top 35. Delta got the closest with a 37th place finish.

Here are the 20 best airlines in the world, according to the results of the Skytrax survey: 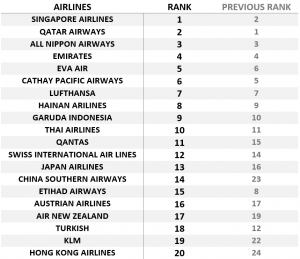