World Cup supporters rankings: Which Country Has the Best Fans?

Almost 90 percent of the tickets for the 2018 FIFA World Cup matches have been sold. According to the chairman of the tournament's organizing committee, Alexey Sorokin, fans have already purchased 2.374 million tickets to the 64 matches, which accounts for 89 per cent of all available tickets.

“We can already predict that we will have full stands at each match of the World Cup.” Said Sorokin. 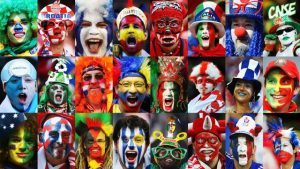 Russian football supporters acquired 46 % of the tickets, while foreign supporters have a 54 per cent share. Among the foreigners, football supporters are coming from the United States, China, Colombia, Mexico and Argentina with the most bought tickets, regardless of the US and Chinese national teams that failed to qualify for the tournament.

The global travel tech-firm, Travelport, reveals the actual numbers of passengers that have booked their flights to Russia between 14 June and 15 July, during the tournaments are being held. The majority flight booking is coming from is from Germany, with the absolute strongest number of 16,213 more booked travelers than in the corresponding period last year – an increase of 44%. Supporters of 2014 World Cup winners have so far purchased more than 62,000 tickets.

For the most part, one-third more travelers are expected, according to the data for bookings made at the end of May. Flights and match tickets are still available for last-minute travelers.

The World Cup is one of the key opportunity for advertisers to reach more audiences while travelling to Russia. As a fact that the passengers traffic for LATAM airlines already went up by 3% for the FIFA World Cup in 2014. Russian airlines are expected to generate the same increase!

The finals will begin in few days and the supporters are better prepared than ever for the long-awaited France-Croatia match!